Magnetic Particle Testing uses one or more magnetic fields to locate surface and near-surface discontinuities in ferromagnetic materials. The magnetic field can be applied with a permanent magnet or an electromagnet. When using an electromagnet, the field is present only when the current is being applied. When the magnetic field encounters a discontinuity transverse to the direction of the magnetic field, the flux lines produce a magnetic flux leakage field of their own as shown in Figure 1. Because magnetic flux lines don't travel well in air, when very fine colored ferromagnetic particles ("magnetic particles") are applied to the surface of the part the particles will be drawn into the discontinuity, reducing the air gap and producing a visible indication on the surface of the part. The magnetic particles may be a dry powder or suspended in a liquid solution, and they may be colored with a visible dye or a fluorescent dye that fluoresces under an ultraviolet ("black") light. 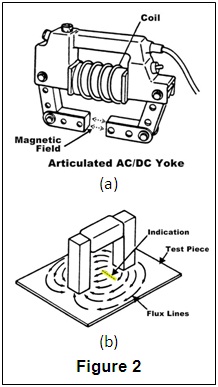 Most field inspections are performed using a Yoke, as shown at the right. As shown in Figure 2(a), an electric coil is wrapped around a central core, and when the current is applied, a magnetic field is generated that extends from the core down through the articulated legs into the part. This is known as longitudinal magnetization because the magnetic flux lines run from one leg to the other.
When the legs are placed on a ferromagnetic part and the yoke is energized, a magnetic field is introduced into the part as shown in (b). Because the flux lines do run from one leg to the other, discontinuities oriented perpendicular to a line drawn between the legs can be found. To ensure no indications are missed, the yoke is used once in the position shown then used again with the yoke turned 90o so no indications are missed. Because all of the electric current is contained in the yoke and only the magnetic field penetrates the part, this type of application is known as indirect induction.
Prods 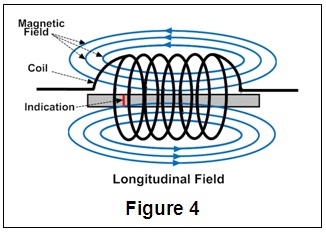 Most horizontal wet bath machines ("bench units") have both a coil and a set of heads through which electric current can be passed, generating a magnetic field. Most use fluorescent magnetic particles in a liquid solution, hence the name "wet bath." A typical bench unit is shown at the right. When testing a part between the heads, the part is placed between the heads, the moveable head is moved up so that the part being tested is held tightly between the heads, the part is wetted down with the bath solution containing the magnetic particles and the current is applied while the particle are flowing over the part. Since the current flow is from head to head and the magnetic field is oriented 90o to the current, indications oriented parallel to a line between the heads will be visible. This type of inspection is commonly called a "head shot."
Central Conductor

When testing hollow parts such as pipes, tubes and fittings, a conductive circular bar can be placed between the heads with the part suspended on the bar (the "central conductor") as shown in Figure 6. The part is then wetted down with the bath solution and the current is applied, travelling through the central conductor rather than through the part. The ID and OD of the part can then be inspected. As with a head shot, the magnetic field is perpendicular to the current flow, wrapping around the test piece, so indications running axially down the length of the part can be found using this technique.